Big news for fans of the Doctor Who spin-off Class, a leaked image from this Thursday's release of Doctor Who Magazine shares details of the series being picked up by Big Finish for two volumes of stories.

The full cast of Class is set to return for this series, and they will be joined by a very familiar face.  Sophie Aldred (also known as Seventh Doctor companion Ace) is set to star alongside of them.  Ace will return to Coal Hill School for the first time since the serial Remembrance of the Daleks. 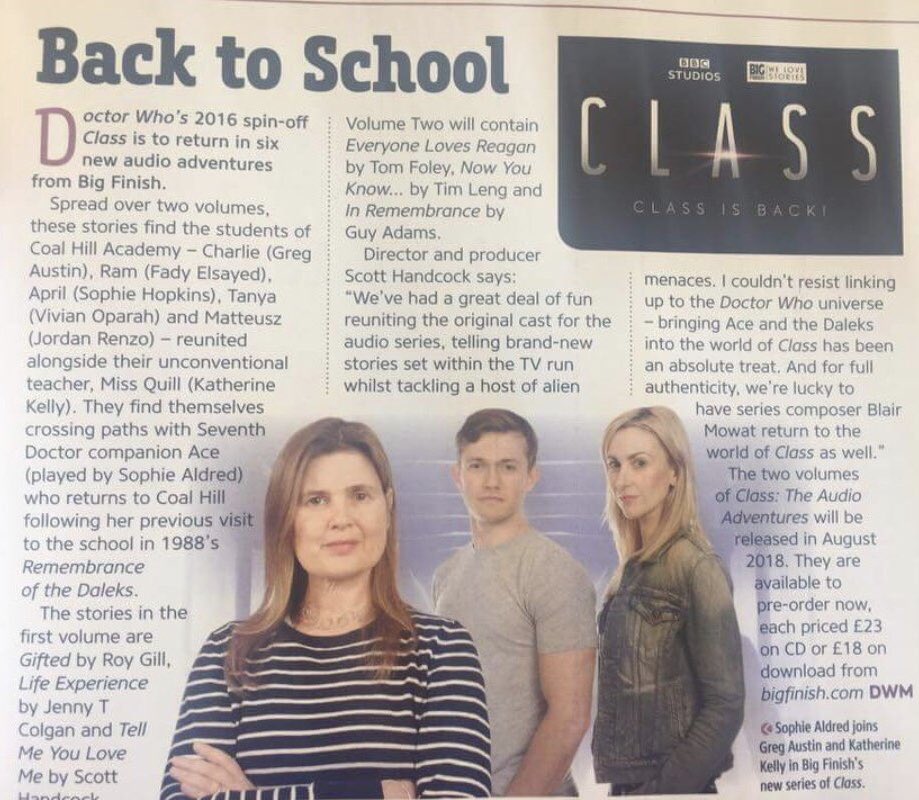 The leaked image from this week's DWM detailing the Class pick-up.  (Courtesy of @BadWilf on Twitter)

Doctor Who Magazine tells us that the two volumes are comprised of three stories each.  The first has Gifted by Roy Gill, Life Experience by Jenny T. Colgan, and Tell Me You Love Me by Scott Handcock.  While the second has Everyone Loves Reagan by Tom Foley, Now You Know... by Tim Leng, and In Remembrance by Guy Adams.  Both volumes will be released this August.

In case you were doubtful of the announcement holding any truth, Class star Greg Austin took to Twitter to confirm the news.

From the outpouring of support on Austin's Twitter page plus the revival petitions that can be easy found with a quick internet search, it seems that this return of Class will be welcomed within the Whovian community.

You can read Doctor Who Magazine #526 when it released this Thursday.  It is suggested that this is also when Big Finish will open pre-orders for these upcoming volumes.